More Sonnets from the Portuguese by Janet Eldred 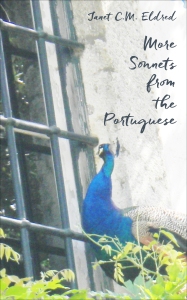 Zélia Nunes, a widow in her mid-40s. When Zélia receives an email from an ex-lover, her powerful inner longings threaten long-held traditions of Azorean-American and Azorean life; these poems are rooted in the language, imagery, and stories of land and sea, family, labor, spirituality, and Catholicism. Though this sonnet novella is decidedly secular, the narrative is structured liturgically, a mode of tracking time in Azorean communities that is as strong as agricultural seasons and more salient than months, seasons, and school calendars. Capturing the essence of a very visible culture, Silicon Valley, and a mostly invisible one, the San Joaquin Valley, More Sonnets from the Portuguese is familiar and exotic.

and many more retailers!